Every Friday I will be posting some sort of crafty project that I have completed in the past.  It could be anything from baking, to sewing, needlecrafts, art, decorating, etc. 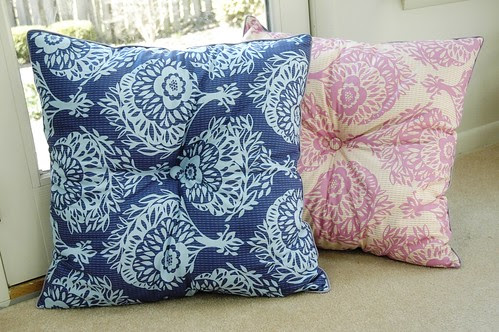 This is a pretty recent project that I finished just a couple of weeks ago.  Like I said earlier,  I'm not really feeling the Innocent Crush line - but I do have quite a weakness for the woodcut prints.  You might be seeing a project coming up where I use this print again in the home dec weight.  Also, have you seen Jamie's recovered chair?  I seriously did some major shrieking when I saw that post.  That's what's in store for my couch sometime down the road. 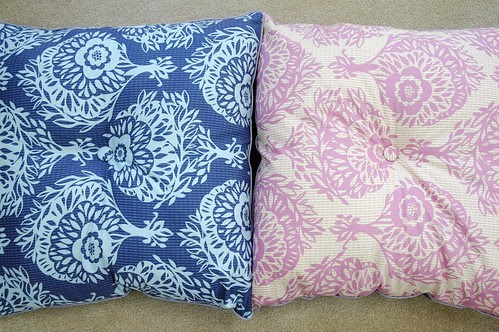 Anyway, back to the pillows.  Pretty simple, 26" with purple piping (oh how I love adding piping to everything now that I've conquered my fear of it), and a simple tuft in the middle, topped with a covered button.  Buttons that I've had to resew three times now since my toddler has gotten so good at ripping them off.
I actually made my own pillow forms for this too, because I could not justify paying $40 each at Joann's.  Heck, even if I used a coupon, it's still way more than I wanted to pay.  So I basically just bought two 32oz bags of fiberfill ($4.80 each w/a coupon) and stuffed them into some simple muslin cases that I cut and sewed myself.  They're definitely a bit more lumpy than true pillow forms, but the tufting really helps to compress everything down.  And Phoebe has been dragging them around and jumping on them for weeks and hasn't noticed a difference.
Posted by Unknown at 11:35 AM

Email ThisBlogThis!Share to TwitterShare to FacebookShare to Pinterest
Labels: past project friday, sewing