It's not even December yet and already our holiday festivities are in full swing. 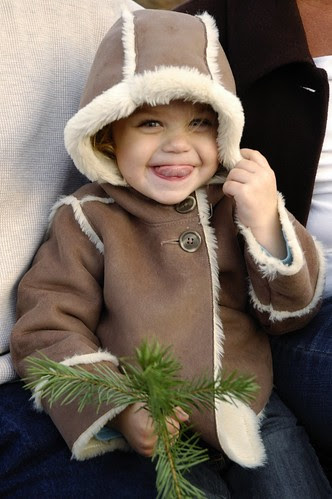 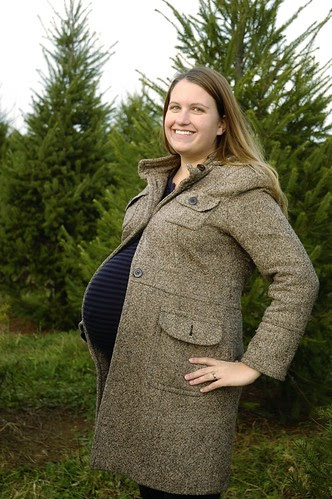 We cut down our Christmas tree, took obligatory 34 weeks pregnant photos (please disregard the look of exhaustion and no makeup on my face), and decorated every square inch of our house.

It has been the most fun holiday season that I can remember because Phoebe is super into it this year.  I couldn't even count the number of times that Phoebe "ooooo'ed" and "aaaahhhhh'ed" and said "That is so so pretty/sparkly" while we got out our decorations.   And she tries her darndest to hug and kiss the Christmas tree about 20 times every day. "I LOVE my Christmas tree!" 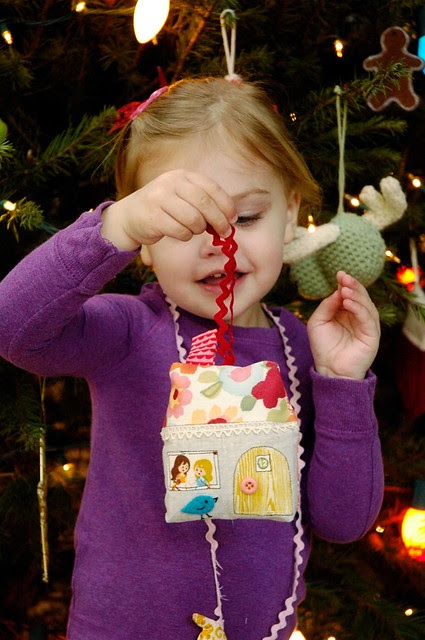 We've also been doing some holiday crafting.  I have to keep Phoebe's projects a secret for right now since they're gifts for the family, but this is a little something that I whipped up for my Modern Quilt Guild's ornament swap that took place at tonight's meeting. 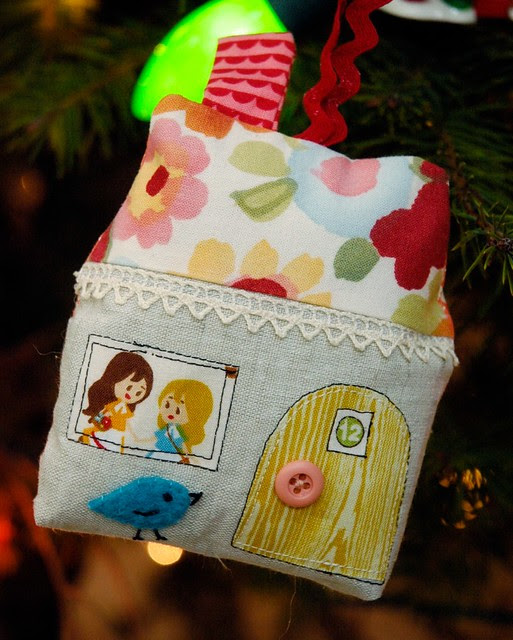 I can't take credit for the adorable pattern - I spotted it on Pinterest (of course!) a couple weeks ago.  You can find the full tutorial and printable pattern here. 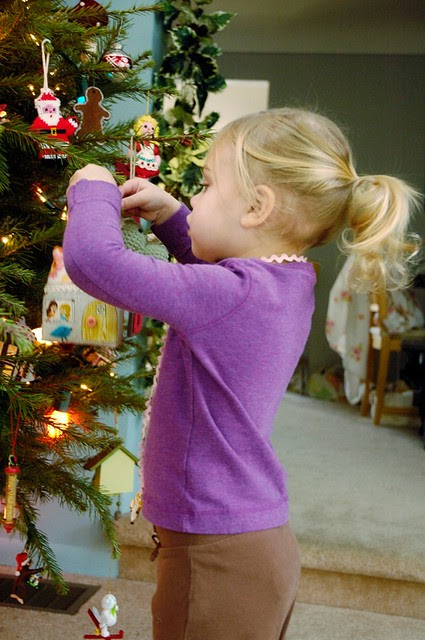 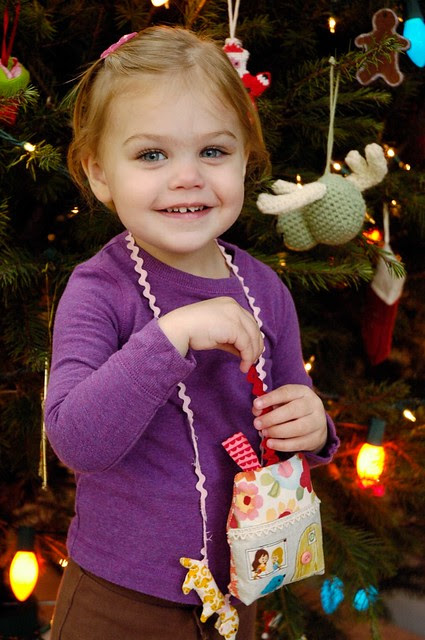 Phoebe was pretty bummed when I had to wrap this one up to give away, so I think I'll be making a couple more of these sweet little cottages to grace our Christmas tree!

More projects from the couch

I get bitten by the same crochet bug every fall.  Once the weather starts getting cooler, I find myself venturing into yarn shops and scouring my studio for misplaced crochet hooks that haven't seen the light of day since last winter.  You can definitely call me a seasonal crocheter.

This year I'm more in love with it than ever since 1) Just about all of my projects are for the new baby, and each stitch gets me more and more excited for her arrival  2) I've pretty much surpassed beached whale status and it's incredibly uncomfortable and exhausting to do most any activity that doesn't allow me to lie on the couch with a carefully calculated placement of at least 20 pillows.

My main project that I'm working on at the moment is an afghan for the new baby.  I guess I've set the trend that each new baby gets his or her own quilt, cross-stitch, embroidery, and crocheted afghan.  This is what Phoebe's looks like.

I picked out the yarn before I even started looking at patterns (because I like to live dangerously :), and finally settled on 7 shades of Berroco Comfort yarn in a worsted weight (white was on back-order at the time so it's not pictured).

After falling in love with this blanket (the whole room really) on Pinterest, I followed Dottie Angel's basic how-to for joining the squares as you go.  But basically, each square is made up of 15 rows of 25 double crochets.  It's incredibly relaxing since it's a simple stitch with basically no counting, and you can actually carry on a conversation while you're working without losing your place.

This was all the progress that I had made back in October since my white yarn was on backorder for FOREVER, but since it finally arrived last week the blanket is now just about halfway completed.

But in the meantime, I had found the last two skeins of Berroco Plush for half price in the discontinued bin, and they were so soft and frothy that I just had to make something for my winter baby.  This is an incredibly basic baby hat pattern that I have made a million times, but it took me forever because the yarn is so fluffy and fuzzy that it was near to impossible to see or count my completed stitches.  After ripping it out more times than I'd like to remember, I finally just winged it and guesstimated the entire thing, adding and subtracting stitches when I thought the hat started to look lopsided.

Does anyone else have any great baby crochet patterns to share?  I'm looking for my next project!

Anyone else out there celebrating Thanksgiving?  Or has everyone skipped ahead to Christmas?

Don't get me wrong, Christmas is definitely my favorite holiday of the year and I like to go all out with gingerbread houses, cutting down a fresh tree, and coating our house in multiple layers of tinsel and glitter, but I've always loved Thanksgiving and it makes me kind of sad that it gets the shaft - being stuck there in between Halloween and Christmas.

When I was younger, Thanksgiving consisted of me sleeping in, and waking up in just enough time to watch the parade while helping my mom make pumpkin pies (she made the crust while I made the filling), going to my grandparent's for the absolute best meal of the year, then playing games and eating said pie the rest of the evening.  Such a low-key, cozy holiday.

Taking a day to give thanks became even more important to us three years ago when we discovered just a few days prior that our cycle of IVF was successful and we were expecting our first baby after two years of trying to conceive.  When we went around the table to say what we were thankful for, we passed out pictures of our precious little embryo.

So I've definitely been trying to make Thanksgiving meaningful in our house and talking with Phoebe about the first Thanksgiving (and as one of my friends said, "Without going into the whole Trail of Tears thing", lol) and what it means to be thankful for what we have.

The major bummer is that there really aren't a lot of decorations that scream "Thanksgiving",  and since I like to keep things festive around here, I've resorted to making a lot of my own.

Phoebe became really smitten with finding pretty leaves in October, so we ended up pressing a bunch of them and suspending them from our big picture window.  Of course my husband walked in and immediately questioned my sanity as to why there was a giant stick suspended in our living room (as I'm sure most of the other moms at playgroup were when I found it in the park and drug it back to my car a couple weeks ago).

I also took some inspiration from Pinterest and made a bunch of these simple garlands by cutting out random leaf shapes from some felt scraps and sewing them together with a basic running stitch.

This little crocheted turkey and pumpkin pie have actually been around for quite awhile, as I went crazy during the early days of amigurumi and crocheted pretty much any free pattern I could find.  The turkey pattern can be found here, but I can't seem to find where the pie pattern came from.

I hope all of you have just as much to be thankful for!

That was one interesting quote by Andy Rooney that I picked up during one of his many tributes that have been playing on the news lately.

Sure, not the most eloquent statement - but what person doesn't like to have an assortment of boxes, bags, and pouches in which to organize their life?

And nesting pouches?  Even better!  A pouch to put all of your other pouches into.

I made these using an assortment of Denyse Schmidt's new fabric line for Joann's - Daisy Mae.  The largest pouch is 12" square and the rest decrease in increments of 2".  I layered all of the outer pieces with some light batting and quilted them all with different straight-stitch designs.

I highly doubt that these would be Andy Rooney's top fabric choices, but I think the recipient will be happy!

Since I really don't need many baby supplies for this second little girl, I decided to splurge when it came to making her some special keepsakes. 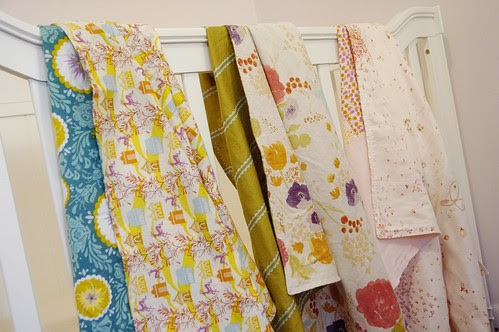 Right now I'm in baby blanket production mode since all of Phoebe's baby blankets have been claimed by, well, Phoebe of course. 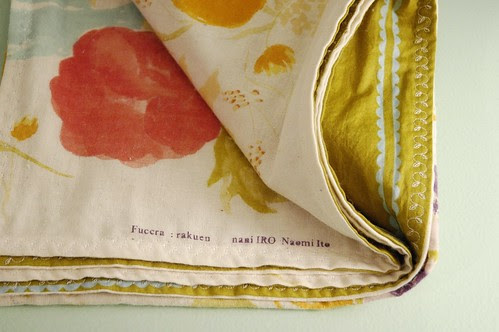 I have been madly in love with fabric designer nani IRO for a looooong long time.  Not only are her prints incredibly gorgeous, but some of them are printed on the softest, most lovely double cotton gauze - of which I have been completely smitten ever since Heather Ross' Far Far Away collection came out.

So why isn't my entire house swathed in this fabric?  Well, at about $22/yard, it's definitely a splurge for our current budget.  But after a couple of good Etsy sales, I went ahead and order a yard of this print...

All of these blankets are pretty simple with just one piece of fabric for the top, and one for the backing.  I sewed them right sides together, turned them out, then used a decorative topstitch around the edges.

I paired each of them a little differently - this one has the double gauze top with a voile pastry line backing....

.....and I pieced a backing for this one out of all of my leftover Far Far Away double cotton gauze. 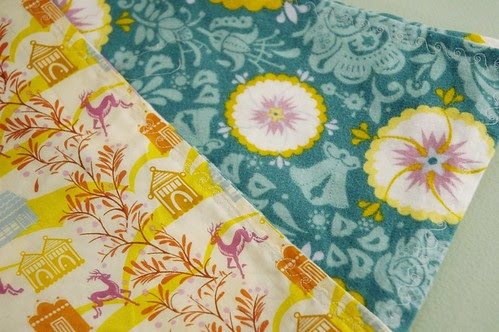 Finally, this one has a Little Folks voile top with a Folksy Flannel backing - both purchased from Pink Castle Fabrics.

Each one is softer and more luxurious than the next, and I think that both baby and momma are going to love cuddling together with these. 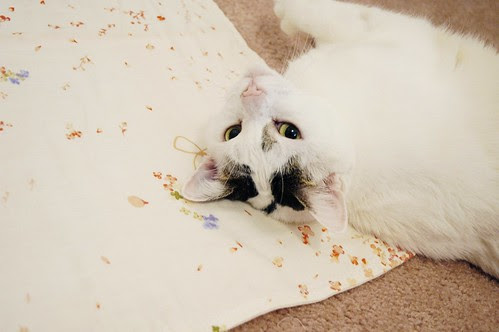 And Polly too, of course.

A quilt for the new baby

Did everyone out there have a wonderful Halloween? 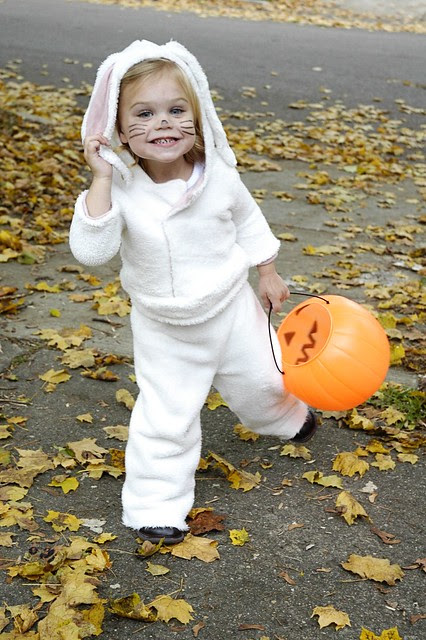 This little bunny rabbit did!  Although she looked more like a chocolate Easter rabbit by the time the night was over :)

In addition to costume sewing, I've been busy working on a quilt for the new baby and am thrilled to have gotten it finished just in time to join in the Blogger's Quilt Festival!  I think that the festival is nearing almost 600 entries, so if you need any quilty inspiration, or just want oogle some beautiful quilts, this is the place to be!

It took me awhile to figure out what kind of quilt to make for this new little girl.  Phoebe's was easy since I based her entire nursery off of the fabric I used to make her quilt, but since I don't really know which direction I'm taking the new nursery yet, I was a bit stumped on where to start.

I didn't want to make anything that screamed "baby!", because I hope that she'll keep this quilt close to her throughout the years as she grows up.  I ended up turning to Pinterest (of course!) for inspiration - and fell in love with this mini quilt.

I've always loved the wonky stars pattern, but I especially love how in this pattern they're all interlocking, which cause pinwheels to form in the negative space.

I guess you could call this a scrappy quilt, but most of it came from me finally cutting into yardage of some of my favorite fabrics that I had been hoarding for way too long - some Flea Market Fancy, Munki Munki, and other random prints that I'm just smitten with.  What better project is there to use your prized pieces in than a quilt for your new baby?

I backed the quilt in a fun rainbow stripe fabric from Alexander Henry, and quilted it in a free motion loop-de-loop pattern.  The binding is patchworked together from more favorite fabrics.

Now it's just waiting for an action shot with new baby (no we still haven't picked a name yet!).  9 more weeks to go!