Here's another quilt that I finished over the summer.  It has long been sent off to it's recipient, but the photos have been sitting here for forever, just waiting to be blogged about.

So this was another commissioned project - a wedding gift - and the only information that I was given was that a) the couple's apartment is very modern and mostly white, b) the couple really likes peacocks.

Thankfully, feathers of all sorts seem to be a big trend right now, so it wasn't hard finding a modern peacock print.  I went with a couple of prints from Dear Stella's line, Lanikai, then threw in some coordinating solids.

I stayed true to my usual sewing method and didn't plan a darn thing.  I made some half square triangles, and haphazardly picked up whatever fabric was lying close to me and sewed some wonky corners onto 6" white squares.  Then I threw everything onto the design floor (seriously, I've been quilting for years and STILL haven't made a design wall.  Eesh!) and rearranged until I shouted, "Eureeka!"

I backed it in a giant piece of the Dear Stella peacock fabric, and quilted it with random (of course!) straight lines.

Word on the street is that the couple loved it!  Congratulations, you two!
Posted by Unknown at 5:58 PM 2 comments: Links to this post

All we needed to send her on her way (aside from one of ten monthly tuition checks and a boatload of paperwork, meetings, orientation, etc.) was a couple of momma-made items to make her feel at home during those long three hours a day, four days a week that she is away from us. 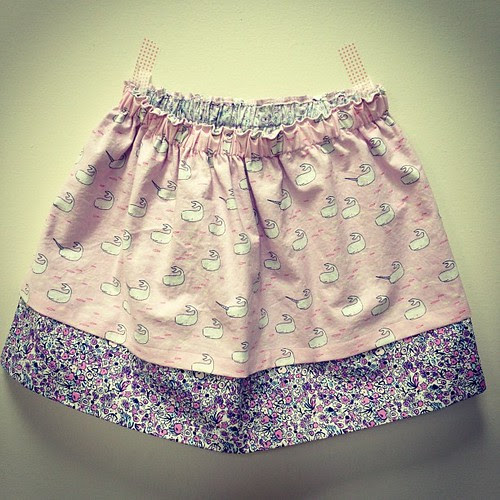 First off - a brand new skirt to wear on the first day.  Fabric is from Sarah Jane's "Out to Sea" collection (narwhals!!!), and the double layer skirt was made using Dana's tutorial. 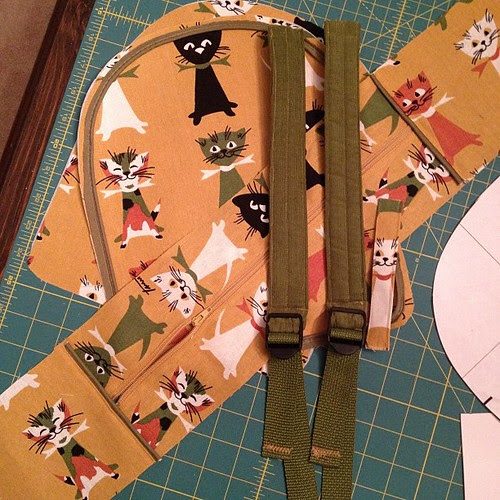 Next was the most quintessential of school items - a backpack.  I love love love Rae's Toddler Backpack pattern because it's super easy, holds it's shape really well - and it's toddler sized!  Most commercial backpacks are sized so that they practically swallow middle school students - let alone preschoolers.  This one is perfectly proportioned - but also comes with instructions on how to size it up for when your toddlers turn into big kids.

Phoebe picked out the Contended Cats fabric from Tammis Keefe tribute collection by Michael Miller.  A quick search revealed that they have it on sale over yonder at Fabricworm right now!

Truth be told, I don't actually give Phoebe total freedom when picking fabrics for her projects, because otherwise we'd end up with crazy psychedelic animals, or something that would leave a trail of glitter wherever she went.  So I end up picking about four or five fabrics that I think would appeal to her, but yet still stay within my realm of design sense, and let her pick from those.  Win win. 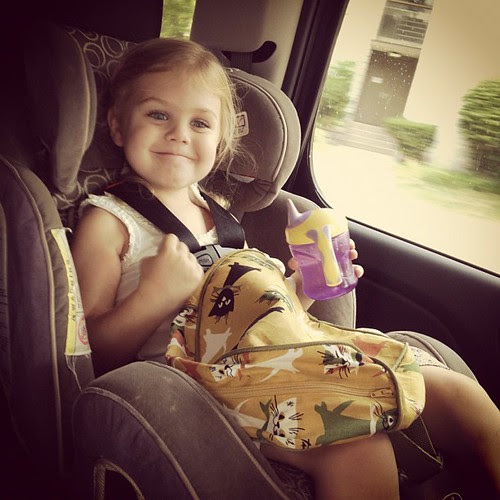 And here's my silly girl at the end of her first day.  Super happy and excited to go back again tomorrow.  Her funniest comment about the day?  "I didn't cry or scream at all....  but lots of other kids did!"
Posted by Unknown at 7:11 PM 5 comments: Links to this post 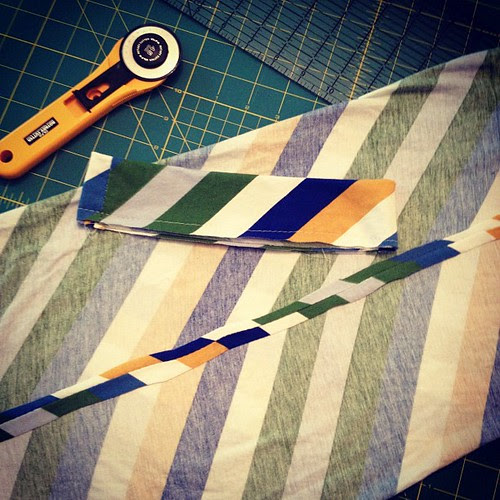 I'll be back soon with lots more Phoebe clothes (I've got to round up some photoshoot bribes first) and some other back to school sewing projects!
Posted by Unknown at 6:53 PM 5 comments: Links to this post