Do NOT try this recipe 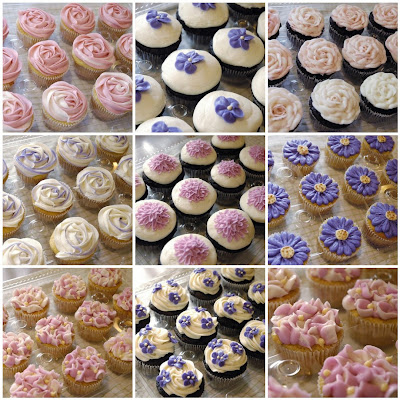 The oven has been going all week long around here.  After finishing the cake pops, I got straight to work on these 100 wedding cupcakes. All of them are covered in hand piped flowers that match the colors of the bride's bouquet. Half yellow cake, half chocolate cake, all covered in cream cheese icing. The frosting I use most often is a Swiss meringue buttercream (SMBC).  It definitely takes a bit more finesse to master, but it's seriously the most deliciously silky, light, and not-too-sweet icing in the world. So when the wedding couple asked for cream cheese icing, I figured that I'd just toss in a pound of cream cheese to a batch of SMBC and we'd be good to go.  Well, Thursday night after 6 cups of sugar, 2 dozen eggs, 10 sticks of butter, and 3 hours of listening to the mixer run nonstop, I finally came to the conclusion around one in the morning that cream cheese and SMBC do not get along.  At all. SMBC is a really finicky type of buttercream and goes through many stages where you think you've totally messed it up.  It starts off as a fluffy meringue, then goes through a really soupy stage, followed by the curdled, cottage cheese look, then finally just when you think you've ruined it, it comes together as fluffy buttercream.
The basic recipe would come together fine, but the second I added in even the tiniest bit of cream cheese, the icing would immediately separate into a curdled mess. After trying to google some damage control and reading about other people's SMBC/cream cheese disaster stories, I threw in the towel and went to bed - knowing that I had no frosting made, 100 undecorated cupcakes, and a client coming to pick them up in less than 24 hours. I woke up early and resorted to a good old gooey cream cheese, butter, and powdered sugar icing, and a wonderful mother who babysat my daughter all day long.
Take that, buttercream!
Posted by Unknown at 5:17 PM