We've been putting off decorating the bedroom since we moved in last December since, let's face it - we're the only ones who hang out in there anyways and we wanted to get to the main living areas first. These swatches have been hanging on the wall above our bed for about the past 7 months and I figured I might as well get started on it now since my motivation is directly proportional to how big my tummy is. 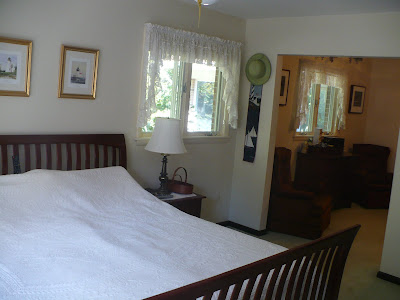 These are pictures from before we moved in (ie. not our stuff), but our bedroom is a super weird setup since the previous owners knocked out a partial wall between two bedrooms.  So our furniture is staggered between the two rooms,  and we have one of the doors blocked off with a dresser just because there are so many kooky angles to the "room" that there are no other good place to put it. 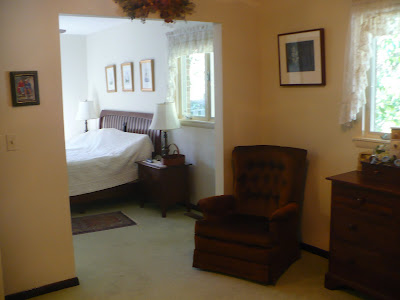 We're still working on what to do with all of the furniture, especially since we're turning the far wall into a small corner for the new baby, but at least I finally got some decent colors onto the walls! This is as much as a sneak peak as I can give so far since there is currently junk covering every other square inch of the floor.  But we finally decided to go with Winter's Day from Martha Stewart (gray) for the majority of the room with an accent wall of Realm by Behr (deep blue).
About a million years ago I ordered a bolt of Heather Bailey's picnic bouquet in lagoon from Pink Castle Fabrics (my favorite print ever!) and finally got 2 out of six curtain panels made.  Next step - painting all of the window, floor, and door trim - a task I despise with all my being, but ends up being sooooo worth it in the end!
Posted by Unknown at 12:24 PM