When our crafty powers combine....

Living in Michigan is not something that I typically brag about....  I mean, I don't think that anyone has ever said "Man, I wish that I lived it Michigan - what an awesome place!"  But I was pretty darn excited when Rae of Made by Rae, announced the first ever SE Michigan Crafters Meetup that took place last week.
It was hosted by Rae herself, who's blog I've been following for quite a long time, so she's pretty much like a celebrity to me; and Karen of Pattern's by Figgy, who creates some simply fantastic patterns - my favorite being the Tee for Two shirt.  I had briefly met both of them at Maker Faire Detroit last summer, so it was great to see them again. 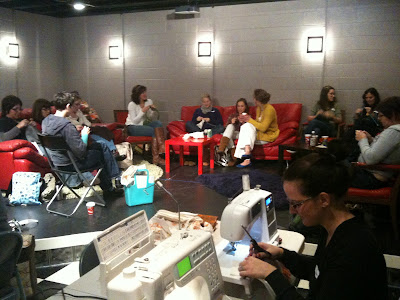 There was a fantastic turnout of about 25 sewers, quilters, knitters, crocheters, and other crafters.  Rae actually had to close the guest list because the room wouldn't hold anyone else!  It was held in the youth room of Rae's church, which was a great space.  It had cozy couches for the needlecrafters, lots of tables for the sewing machines, and a pool table and ping pong table for our cutting mats - perfect!  Even a nice kitchen area for the tons of snacks that everyone brought. 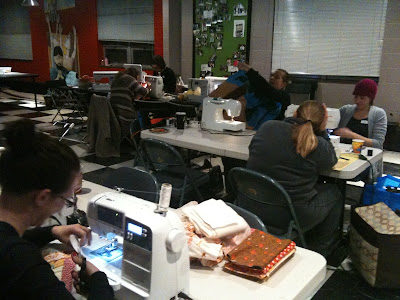 What made the evening even more fantastic is that my best friend and fellow crafter Lisa, of What Lisa Made, was able to drive up from Toledo.  We only see each other about once a month, so it's always a good time when we get together.  Not to mention that we were toddler-free for once!
While we did end up talking most of the night away with Rae, Karen, and all of the other incredibly talented crafters (lots of sewing revolution talk), I am amazed that I actually got quite a bit accomplished.  Phoebe got a new Tee for Two shirt, and a pair of flannel Quick-Change Trousers. 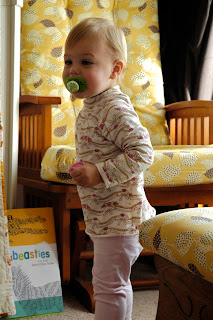 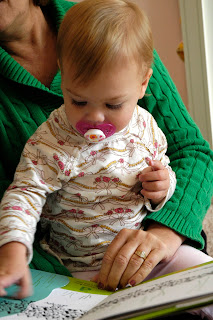 Sorry about the bad photos - we had shots that morning and weren't in the best mood to be photographed :(
All in all - awesome evening!  Can't wait for the next meetup!
To see more photos of the meetup (including ones of moi), go here...
Posted by Unknown at 6:27 PM

Email ThisBlogThis!Share to TwitterShare to FacebookShare to Pinterest
Labels: sewing