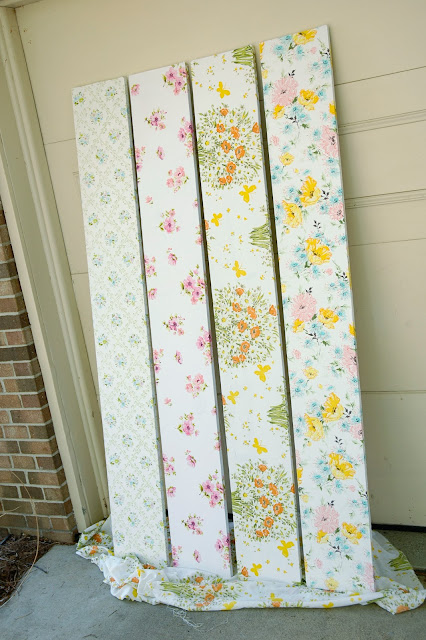 I've slowly but steadily been making some progress on my studio.  Up until recently, I've been scrounging around for my crafting supplies amongst 15 half-unpacked boxes sitting smack dab in the middle of the room.  It didn't really lend itself to a very efficient or organized creative process - both of which I lack in even the best of circumstances.
While I was hoping to thrift or purchase some sort of lovely storage system, our budget didn't have room for anything to my liking, so we ended up installing a super cheap track shelving system.  It definitely gets the job done, but isn't very pretty to look at - especially when all that we were using as the shelves themselves were 6 foot unfinished pine boards.
I decided to pretty them up with some vintage sheets this past weekend, and here's how I did it.... First I painted the boards with two coats of primer.  I'm not entirely sure if this is a necessary step, but some of the sheets were on the sheer side, so it keeps the knots and the wood grain from showing through. Starting at one end, I coated a section of the board in spray adhesive and smoothed the sheet flat. I continued all the way down the board until the first side was covered. Then I flipped it over and did the same thing to the other side. I folded the ends up - gift wrap style - after giving it another good shot of spray adhesive. Then I painted a good coat of Mod Podge all the way down the seam and on the folded over edges. 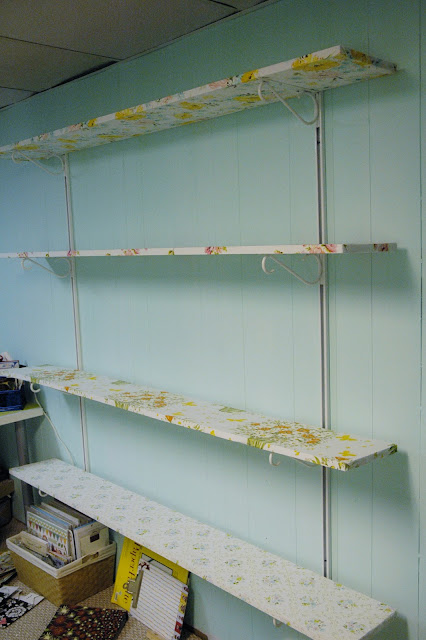 And voila!  It took about 15 minutes in the sunshine to dry, and I had them screwed into the shelving system in no time.  Overall this project took maybe an hour to complete and didn't even use up the entire can of adhesive.
Even my husband was impressed at how smooth and clean they turned out.  And I thought for sure I was going to end up in a sticky mess of glue and frayed sheets. 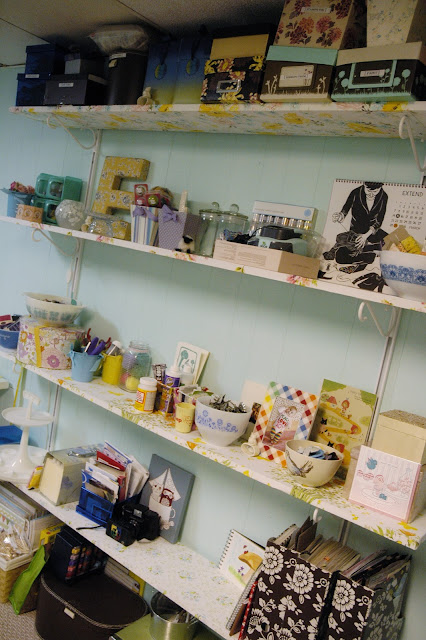 The only thing left to do is load it up with craft supplies and think about what else I'm going to cover in fabric!
Posted by Unknown at 4:58 PM